Insertion of a gastric band for revision sleeve gastrectomy: a case report

Bariatric surgery for the treatment of obesity, first introduced in the 1950s and 1960s, is now relatively common. Often, patients have an adjustable gastric band inserted first because it does not require modifying or removing parts of the gastrointestinal tract. This procedure is associated with short hospital stays and quick recoveries and can be adjusted without further surgery. Typically, it is only after mechanical banding failure or failure to achieve a satisfactory reduction in body mass index (BMI) that patients undergo other bariatric procedures that involve modifying or to remove parts of the gastrointestinal tract. Recent research has suggested that gastric banding is associated with better weight reduction outcomes as a secondary or follow-up procedure after failed initial bariatric surgery.

Obesity is a major cause of morbidity and mortality worldwide. While a wide range of treatments are currently being implemented for the management of obesity, bariatric procedures, in particular, are recommended as a treatment option for patients with a body mass index (BMI) of 40 kg/m2 (by definition, morbid/severe/obese class 3 [1]) who implemented but failed a diet and exercise program and had obesity-related comorbidities [2,3]. Bariatric surgery is correlated in the literature with a longer life expectancy in obese patients compared to obese patients who do not undergo bariatric surgery [4]and is also associated with remission of diabetes mellitus [5]. Bariatric surgery has also been shown to reduce the risk of gestational diabetes and hypertensive disorders of pregnancy such as pre-eclampsia in women who become pregnant later. [6].

Bariatric procedures can be categorized, based on the main mechanism(s) of the procedures on the gastrointestinal (GI) tract. Sleeve gastrectomy and gastric banding are considered restrictive procedures, in which either the size of the stomach is reduced or the luminal diameter of the stomach is reduced by the occupation of space, resulting in a satiety with reduced food consumption. [7]. Gastric banding involves inserting a saline-inflated silicone band around the bottom of the stomach; this slows down and limits the amount of food that can be eaten at one time, and weight loss is achieved primarily through this restriction of nutrient intake [8]. Gastric banding is associated with a very low mortality rate (about 0.05%) [9]. Currently, in the United States, only one gastric band brand retains Food and Drug Administration (FDA) approval: Lap-Band (ReShape Lifesciences, San Clemente, CA), which is classified as a weight-loss device. [10] and is designed to be inserted laparoscopically. Due to its safety and effectiveness, gastric banding was generally the first choice or initial bariatric operation for the surgical treatment of obesity. [11]; laparoscopic gastric banding, once estimated to account for more than a third of all bariatric surgeries in the United States a decade ago [12]they are now estimated to represent only about 1% of all bariatric surgeries in the United States [13].

We present a case in which a 43-year-old woman with a long medical history, including cryptogenic organizing pneumonia, gastroesophageal reflux disease (GERD), asthma, obesity, and previous gastrectomy, underwent a Laparoscopic gastric band insertion to revise prior gastrectomy. , a sequence of bariatric procedures that is the reverse of the typical sequence for bariatric surgeries.

Presentation of the case

Our patient is a 43-year-old woman with shortness of breath (SOB) and morbid obesity refractory to sleeve gastrectomy. Previously, the patient had undergone a laparoscopic sleeve gastrectomy in 2014; at the time of this operation, she had a BMI of 36 kg/m2. Despite beginning a diet and exercise regimen intended to complement the procedure and lead to weight loss, the patient was unable to lose significant weight. The patient reports SOB while walking a flight of stairs or walking a block.

The patient’s medical history includes asthma (with an exacerbation in 2015), cryptogenic organizing pneumonia (2008), GERD, migraines and recurrent UTIs (UTIs, 2009 and 2010). Between presentation and surgery (two months), the patient was put on a strict 800-calorie diet, an increased exercise regimen, and saw a dietitian.

On examination, the patient had a BMI of 44 kg/m2. The patient was also found to have a cough, shortness of breath and wheezing. Subsequently, the patient was diagnosed preoperatively with morbid obesity refractory to anterior sleeve gastrectomy. The patient underwent diagnostic laparoscopy, adhesiolysis and insertion of a gastric band. The laparoscopic band was successfully placed without incident, and the postoperative diagnosis was morbid obesity refractory to prior gastrectomy.

The patient’s history of bariatric surgery required both an upper gastrointestinal X-ray and an abdominal X-ray (or KUB, for “kidney-ureter-bladder”), which showed both a properly placed and functional gastric band and no signs of leakage (Figures 1–2). The patient was discharged without incident and followed on an outpatient basis. After the operation, the patient continued to follow with monthly outpatient visits where she was counseled on diet, exercise and received support groups for regular attendance. During these visits, the gastric band was adjusted as needed. Five months after gastric band insertion, the patient had achieved a BMI of 32 kg/m2, representing a 27.2% reduction in total BMI from the time of presentation. Using a BMI of 25 as a standard endpoint [15]our patient’s excess BMI loss (%EBMIL) was 63.2%. 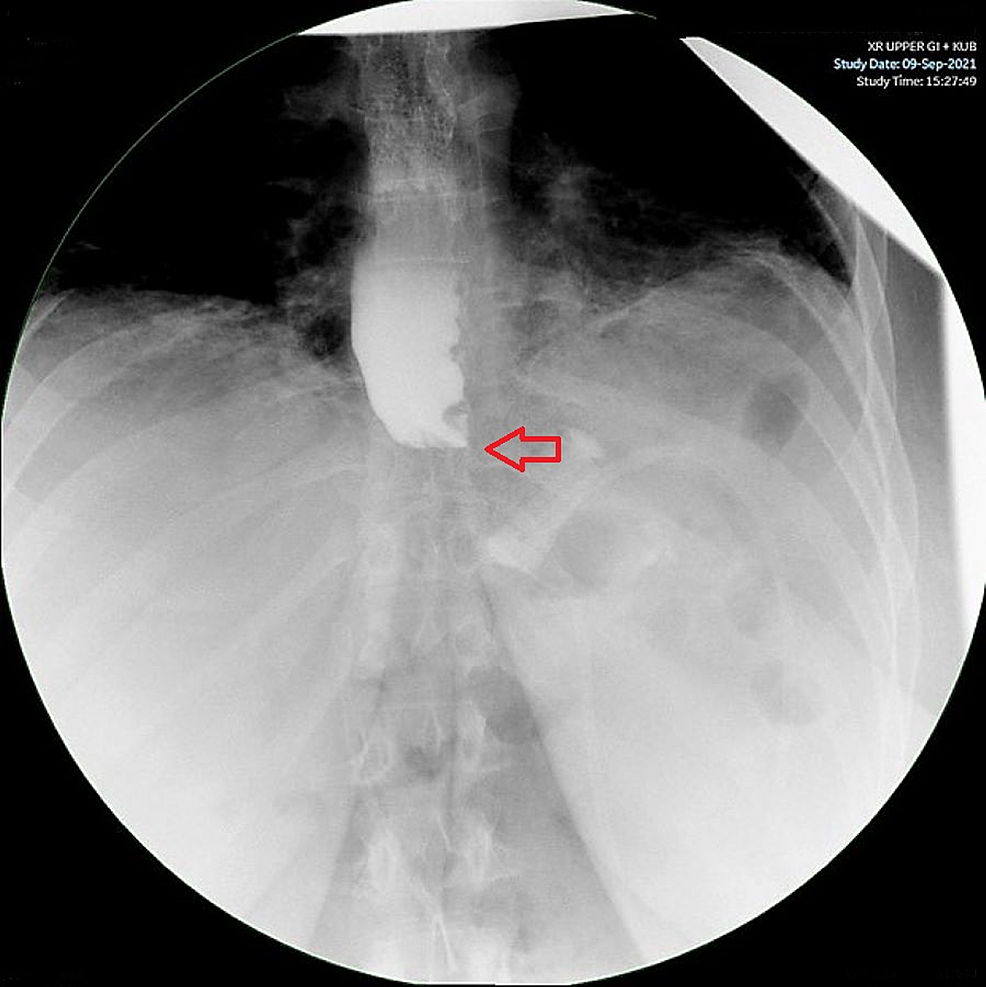 Gastric banding was, until recently, the first choice or initial/primary bariatric operation for the surgical treatment of obesity due to its safety and effectiveness. [11], as well as the fact that gastric banding does not involve permanent changes to the gastrointestinal tract. Until 2011, estimates suggested that more than a third of all bariatric procedures performed in the United States were laparoscopic gastric band insertions [12,13]; the most recent estimates suggest this has dropped dramatically, so that gastric banding accounts for only 1% of bariatric surgeries, and instead sleeve gastrectomies now account for around 60% of all bariatric surgeries [13].

Recent research has suggested that more permanent bariatric procedures such as sleeve gastrectomy or Roux-en-Y gastric bypass, despite the greater risks than banding due to permanent alterations to the gastrointestinal tract, should be the preferred option. initial or first choice bariatric surgery for the treatment of obesity. [16-18]. This research is supported by the greater weight reductions associated with more permanent bariatric surgeries: gastric banding alone was associated with a 47.5% weight reduction, gastric bypass alone with a from 61.6%, gastroplasty (including sleeve gastrectomy) alone to 68.2% % weight reduction and biliopancreatic diversion/duodenal switch alone, a weight reduction of 70.1% [16]. These reports may have contributed to the dramatic increase in sleeve gastrectomies and decrease in gastric band insertions performed over the past decade.

Research examining gastric banding as a salvage, secondary, or follow-up procedure to follow up on failure of other primary bariatric surgery has reported additional reductions in weight and therefore improvements in BMI [19,20], suggesting that the use of gastric banding as secondary bariatric surgery for obesity is a viable treatment. One study found that gastric banding as a salvage procedure for follow-up of failed Roux-en-Y gastric bypass surgery resulted in an additional 20.8% reduction in weight. [19]while another found that rescue banding after failed Roux-en-Y gastric bypass surgery resulted in excess loss of BMI (%EMBIL) from 55.9% to 94.2% [20]. This is consistent with our patient’s outcome, in which a 27.2% reduction in total BMI (an EBMIL % of 63.2%) was achieved with gastric band insertion as surgery. secondary bariatric after failure of primary gastrectomy to achieve reductions in weight and BMI.