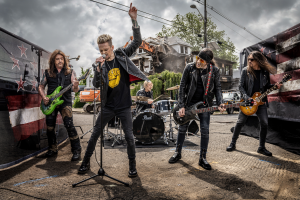 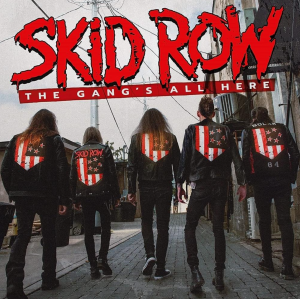 Many people have been on this journey with us… But even though we’ve all gotten older – and a little wiser – the essence of who we all are still exists.

NJ, USA, Nov. 2, 2022 /EINPresswire.com/ — Do you remember the first time you heard Skid Row? “Youth Gone Wild” was on MTV. “18 and Life” was a hit single of the summer and the band was on the covers of Hit Parader, Circus and Metal Edge magazines. That uplifting sound of being young was everywhere. We saw and heard each other in the group and joined in their oversized choirs of camaraderie and rebellion.
​
Rob Hammersmith saw himself in this gang mentality. “I was looking for that,” he recalls. “Everyone goes through that phase of me versus the world, where you just have to stand up and be assertive. Every kid goes through this, and Skid Row made you realize you’re not alone.
​
Snake Sabo realized he wasn’t alone after striking a songwriting partnership with Rachel Bolan. “I saw all this talent that he had – and has – and he brought something out of me. It made me go, man, this is the start of something. I’m like, yeah, it’s where we’re supposed to be at this point in our lives, it was the birth of what would become Skid Row.
​
That something – and that name – represented the relentless impulse of exuberant kids, channeling their love of punk and metal into something understood by a global audience of other kids like them. “As soon as we came up with the name – Skid Row – that’s when I realized we were going to build something really special that really drew on our influences,” Rachel recalls.
​
Their attitude and swagger were palpable in these songs. It was evident. A demo of songs Rachel and Snake wrote together was Scotti Hill’s first time hearing Skid Row, and he wanted to participate. Right from the start, I loved where the music was going. I was like, I have to be in this fucking band! »
​
This fi#%*ing band built something so powerful and so timeless that years later, on the other side of the world, it woke up a young Swedish singer. “You’re young, kinda crazy – fist in the air and f#%* yeah – that kind of feeling,” Erik Grönwall recalled. “Skid Row is young people gone crazy, and I wanted the same thing. I wanted that lifestyle.
​
It’s cliché to say that a band has their whole life to write a first album. The truth is they spend the rest of their lives trying to figure out how they did it. The Gang’s All Here is the octane of an attitude that’s been brewing since the band’s formation in 1986. Producer Nick Raskulinecz lit a creative wildfire by challenging them to deconstruct good ideas and rebuild them into something. even better. Something timeless. He became the arbiter of their legacy, challenging them to go back to instinct and be the same rambunctious kids who made their first two albums.

On ‘World On Fire’, I wrote this very cool riff. Nick said, play the chord here, an octave above the original notes. It created a difficult move, and I didn’t know how to do it physically, but it challenged me. The only time I got it right there is now it’s Skid Row. It was a tough time for me, this guy had to release something Skid Row out of me, yet I’m a founding member of the band!

“We were kids,” Rachel says of writing songs that debuted Slave To The Grind at No. 1 on Billboard and made the self-titled album a No. 6 multi-platinum hit. We wrote from a very different point of view. Nick brought us back to this reflection: what approach did we take on these first two records? What were we doing?
​
“I ended up feeling the same as when we wrote ’18 and Life’ and ‘Youth Gone Wild,’” he says. “I felt like, whoa! We’re doing something really cool here!
​
Making the new album felt like the beginning, when the gang meticulously composed songs together in a New Jersey garage. “It’s so much fun to do it like that, in a room that’s banging on it,” Scotti says. “It felt like we were back in that garage, like the good old days. The only difference is that we now have air conditioning and we no longer breathe in the exhaust fumes from the kerosene heater.
​
Rob knows the feeling. “The way we spent eight to 10 hours a day, trying out ideas and playing things, took us back to feeling like a kid in the garage with your friends,” he says. “This album is very much a group effort, and I really enjoyed how that experience was a very tight-knit group of guys.”
​
This creative closeness led to the spontaneity of writing new songs during rehearsals. Someone demonstrating new riffs quickly turned into “World On Fire” and “Not Dead Yet” written on the spot. “We’ve never done that,” says Rachel. “The other guys give feedback from the start, it really makes you work on instinct.”
​
Still, Scotti says Rachel and Snake writing together is the most characteristic of Skid Row. “The best is what they do together, just the two of them. Let them do what they do. It was like that at the beginning, and I think it’s the best result now, this combination of the guy who writes the giant guitar riffs with the guy who has the punk influence and the poetic type of street poetry.

“I wish I had written those songs,” laughs Erik. “There are a lot of good songs here. This is a good problem to have when you have too many potential singles. There’s a lot of old school Skid Row in these songs on this album, like “Tear It Down”, which I like as a fan.
​
This old school style makes ‘The Gang’s All Here’ instantly familiar. It’s the sound of having a good time. “A lot of the songs are fun,” says Rachel. “These are songs you can sing along to and move on to, which is what our first two albums did. You can fight to these songs. Drink them. Strip for them. All bases are covered.
​
Raskulinecz encouraged them not to be afraid to incorporate the signature accents that define their classic songs. He strove to make the band sound like the band, keeping the same philosophy that producer Michael Wagener used to record them years ago.
​
“Nick is completely aware and respectful of the past,” Snake says. “But it’s more about the essence and soul of why we started this thing in the first place. He said, everything from the beginning of 1985, when I met Rachel, until in 2022 in Nashville, Tennessee, is all Skid Row, and he was there to remind us.
​
Another deja vu is Erik Grönwall and his snarling sound of a curled-lipped sneer that can turn into searing sweetness. “We wanted him to show off his range,” says Rachel. “We wanted him to really take inspiration from his influences – Skid Row happens to be one of them – but mostly let go and do what he does best. “That was my approach,” explains Erik: “A good balance between old school stuff and my way of singing. I had so much fun recording this album because I really like to sing this kind of music.”
​
The first song he heard was “The Gang’s All Here”, and it made him feel like a kid again. “It was old school Skid Row for me – the Skid Row I fell in love with. I thought, wow, they’re really getting back to the old school sound, and I think I can add value here I knew what I was going to do with it the first time I heard it.

From songwriting to performing, the whole band agrees that all ten tracks on The Gang’s All Here are some of their best songs – ever. There’s also a noticeable connectivity in the songs that often gets lost in the technology of music creation. “There’s something Snake and I did together – October’s Song – that we doubled up at the end. It’s really cool, and it was really fun to do. He was standing to the left of the room , I was standing on the right and we were playing together. That’s the way it should be done, and not many people do that these days.

There will always be uncompromising expectations of how Skid Row should be done. Erik expects rigorous comparison with other vocalists throughout the band’s history, but people care so much, that’s a good thing, he says. “People who actually give af#%* are a testament to the greatness of the group. If they care that much, it means the group is relevant.
​
“A lot of people have been on this ride with us,” Snake says. “But even though we’ve all gotten older — and a little wiser — the essence of who we all are still exists.”
​
You will not be disappointed. The Gang’s All Here is a cover of everything you’ve always loved about Skid Row. Snake calls it a rebirth. “There’s a newfound energy and passion — and excitement — because we’ve been challenged. When we are challenged, we rise to that challenge. We still have a lot to say inside. Making this album showed me that we still have a lot of things to do.

Stay up to date with all the latest news with Skid Row via Facebook https://www.facebook.com/skidrow/, Twitter https://twitter.com/OfficialSkidRowInstagram https://www.instagram.com/officialskidrow/ and https://withkoji.com/@SkidRow.


EIN Presswire’s priority is source transparency. We don’t allow opaque clients and our editors try to be careful not to weed out false and misleading content. As a user, if you see something we missed, please bring it to our attention. Your help is welcome. EIN Presswire, Everyone’s Internet News Presswire™, attempts to define some of the boundaries that are reasonable in today’s world. Please see our editorial guidelines for more information.

Previous 5 Underrated Lil Peep Songs To Blast When You Vibe
Next Times, the singer wowed fans with her singing talent