VICTORIA Beckham has ruled out a return to the Spice Girls once and for all – insisting she won’t even reunite with the band for a performance at Glastonbury.

Mel C has spent months teasing how Posh Spice might sing with them if they land the coveted Sunday Afternoon Legends spot at the festival, but it’s not going to happen.

Vic missed their tour and asked if she would reunite with Melanie, Geri Horner, Emma Bunton and Mel B for Glasto.

She said: “I had so much fun being part of the Spice Girls.

“But now with everything else I have with my fashion and beauty line, four kids, I couldn’t commit to that.

“I love girls. I really, really like singing the Spice Girls when I do karaoke, but I think I better leave it at that.” 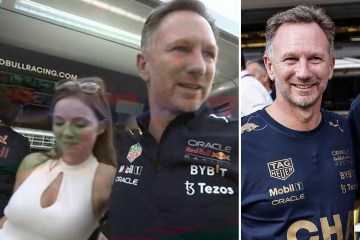 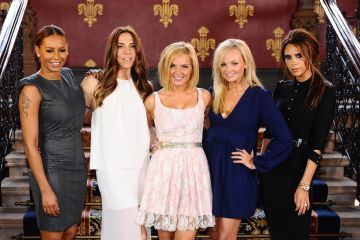 But Victoria is a fan of following ABBA’s lead by launching a virtual residency – which would mean she wouldn’t personally have to appear on stage.

The Swedish supergroup pioneered high-tech spectacle with digital avatars with their hit show Journey to a purpose-built arena in east London.

“I was actually saying it’s a good idea.”

Pregnant Mollie is in the pink

SHE spent years with four other girls on The Saturdays and soon Mollie King will have another special woman in his life.

One week away from giving birth, the singer and her cricketer fiancé Stuart Broad have revealed they are expecting a girl.

They hosted a gender reveal party with their families over the weekend and shared this video on Instagram of her popping a balloon filled with pink confetti.

She told Grazia magazine: “With five nephews, we were convinced that we were also going to have a little boy.”

I’m not sure there’s a whole lot that could save my face these days, but Victoria’s Secret model Nadine Leopold has revealed her secret trick to keeping her look great.

She posted this photo of herself in a Skincycles Hydrating Bio-Cellulose mask, which is claimed to boost collagen and hyaluronic acid to provide anti-aging benefits.

Each mask costs £20, but if that meant I was allowed to be identified in the pub again, I wouldn’t mind paying it.

ROBBIE WILLIAMS is giving fans the chance to appear in his biopic Better Man.

He announced two last-minute black-tie shows at the Royal Albert Hall on November 6 and 7.

The concerts will be filmed for a major scene in the movie, so this is your chance to be in a bit of pop history.

TAYLOR SWIFT is stepping away from music for the big screen.

And she certainly has what it takes to make it happen after enlisting a host of stars for her latest music video.

She directed the Cinderella-inspired music video for the latest track Bejeweled, in which Laura Dern plays her evil stepmother, Haim are her stepsisters, and Dita Von Teese dances alongside her while they’re in martini glasses.

Now, Taylor has hinted that she’s been working on a script for another exciting project.

She said on American television: “I love writing songs, poems, stories, scripts. . . I love writing these things because there’s a part that I don’t quite understand how it comes to fruition.

“Over the past six or seven years, I’ve been doing things constantly, and the more things I do, the happier I am. So I just kept doing it.

Back with the music, the latest stats show Taylor has sold 157,869 copies of her new album Midnights here since its release on Friday, compared to 110,115 sales of The Car, by closest rivals Arctic Monkeys.

Taylor, who said she misses touring and can’t wait to get back on the road, went on to say she feels lucky to be successful in music now that she’s in her 30s.

She continued, “I’m 32, so we’re considered geriatric pop stars. They start trying to feed us at 25. I’m just happy to be here.

“It’s a pretty dark album but I would say I had more fun making it than any album I’ve ever done.”

SOPHIE ELLIS-BEXTOR saw red after the iconic ankle boots from her most famous hit Murder On The Dancefloor were sold to charity for less than they were worth.

On the Amanda Wakeley: Style DNA podcast, the British singer, who released the song in 2001, said, “I’ve always regretted it. They didn’t say in the charity auction that they were the boots from the video.

“So I think they sold them for probably less than what I paid to own them in the first place.”

Sophie often wears extravagant outfits on stage but has to make sure she doesn’t embarrass her 18-year-old son Sonny.

Sophie explained: “I said to him, ‘You’re so supportive’ and he said, ‘It’s a little too much sometimes’.”

Rita MTV work with her husband

RITA ORA and Taika Waititi have taken their first job as husband and wife.

They pose here with the MTV EMA trophies after being announced as hosts of the ceremony in Dusseldorf, Germany on November 13.

It’s a comeback for Rita, who did the job in London five years ago.

She said, “I’m thrilled to be back and sharing the stage with Taika makes it even more special.

“We’ve got it all this year, fun surprises, fantastic fashion, comedy, and most importantly, amazing music.”