Swedish heavy metal band Avatar may not be a priority when you think of typical vegans, but like others going green, the band proves that the diet can appeal to everyone.

Vegan diet stereotypes have deep roots in the long-haired rock ‘n’ roll of the Woodstock era. You know it: this whole counterculture ethos of plugging in, switching on, and unplugging from mainstream media, politics, and, of course, food. This has made healthy and ethical food trends long ostracized as fringe hippie stuff. But a lot has changed since the 1960s. Rock ‘n’ roll, for its part, has evolved from its hippie roots. And vegan food is no longer relegated to alfalfa sprouts and plates of yeast mash, either. Today the two are shameless in your face.

For the leader of Avatar JOhannes Eckerström, going vegan was a logical extension of the band’s evolution. They kept the hippie/metalhead hair (and pro tip: their secret to luscious locks is olive oil). But so many other things have changed.

“Much of the foundation of what became heavy metal came from the realization that the ideas and attitudes of the hippie movement were not quite suited to the less privileged,” Eckerström said in an email to LIVEKINDLY. “There is also a deep-rooted sense of wanting to be nonconformist as well as a forced openness to uncomfortable truths and ideas that may initially seem strange.”

One idea that didn’t seem strange to the group was to give up all animal products. The group – Jonas “Kungen” Jarlsby, John Alfredsson, Tim Öhrström, Henrik Sandelinwent and Eckerström – went vegan about six years ago. “Most of us were vegetarians before that,” he says. “Lots of discussions and exchanges of thoughts took place, also with the help of a long-time crew member and friend who had gone vegan some time before. As much a sweaty boys locker room as a tour bus can be, I’d like to at least pretend it’s a place for growth and self-improvement.

Avatar wants fans to confront the harm they cause to nature.

“Waking Up from the Matrix”

Eckerström says going vegan removed a fair amount of cognitive dissonance for the band. “I saw someone compare it to waking up from The Matrix, and I can only agree,” he says. “Avatar’s most important artistic mission is to explore the darkness and help us as artists remove more and more layers of bullshit and self-mockery from our minds,” says Eckerstrom.

“Much of our anger, both towards the world and towards ourselves, stems from the harm we do to nature and the inhumanity woven into the fabric of our civilization. Our music acts as a vent, a mirror, a communication platform and a place of healing for us, so veganism shows up in many places across many songs, it’s a big part of who we are and therefore what we create.

This harm that humans do to nature – or rather, exploitation of it – has become increasingly evident in the first half of 2020. From the climate crisis to the coronavirus, which has now killed more than 550,000 people and infected more than 12 million people worldwide. world.

Like most infectious diseases, COVID is zoonotic, believed to have started in a wet market in China. And this is an important point for Eckerström and the members of Avatar. This is important because of the link to factory farming and the more than 100 billion animals raised for food every year. Most of these animals are raised on densely populated factory farms. Not only are farms breeding grounds for the transmission of zoonotic diseases from animals to humans, such as viruses in the SARS family, which includes COVID-19, but factory farms and slaughterhouses also experience some of the highest rates. high human-to-human exposure. This is due to cramped working conditions that pack workers elbow to elbow on processing lines.

“[E]a single pandemic has its origin in our domestication of animals,” says Eckerstrom. “The really big one is around the corner and it will most likely come from our chicken factories.” He says the benefits of going vegan “keep piling up,” even if you don’t care about animals at all. “I believe a lot of minds can be opened to the idea of ​​going vegan if we take a more self-centered approach.h. Once people take the leap, I’m sure we’ll see empathy and kindness grow as cognitive dissonance subsides.

Silence in the time of monkeys

That notion permeates the band’s eighth studio album, Hunter Gatherer, which is due out next month. Featuring fellow vegan metalhead Corey Taylor of Slipknot, the album is dark and urgent. The first track, the completely silent “Silence in the Age of Apes”, received rave reviews. Since debuting on YouTube last month, it has been viewed over 1.4 million times.

Avatar’s music is heavy, fast and disciplined in its frenzy. Eckerstrom delivers a Marilyn-Manson-meets-Joaquin’s-Joker nightmare in the Johan Carlen-directed video. But it’s not just shock and awe; it is an orchestrated chaos, intended to explore the biological composition of humanity. The “hunter” in the album title has nothing to do with the modern notion of a recreational deer hunter. Exkerström says it refers to where evolution has taken us “Long before our complex brain created this life which, while very successful in bringing many of us into existence, was devastating on an individual level.”

For Exkerström, food is closely linked to this concept. “I don’t condemn my ancestors for eating meat in the Stone Age. Veganism, as I see it, is a modern idea about pursuing higher morality and improving our lives now and the future of this world. Part of this improvement must be understanding and accepting our nature and where we come from.

He says that even though we are the same animals that we have been for tens of thousands of years, “Everything around us has changed so quickly.“And to survive and thrive now, especially in the age of COVID,” he says, “it has to change faster.”

But it’s a voluntary process, says Eckerström. “It will only do that if we are ready to understand where we came from and where we are right now. As far as mother nature is concerned, we are hunter-gatherers. Now we have to find a way to handle this. »

Hunter Gatherer is Avatar’s contribution to introducing this “voluntary” evolution. “Silence In the Age of Apes”, says Eckerström, sums up the overall theme of the album: “Our doom and our saving grace depend upon the rapid hastening of all things.” 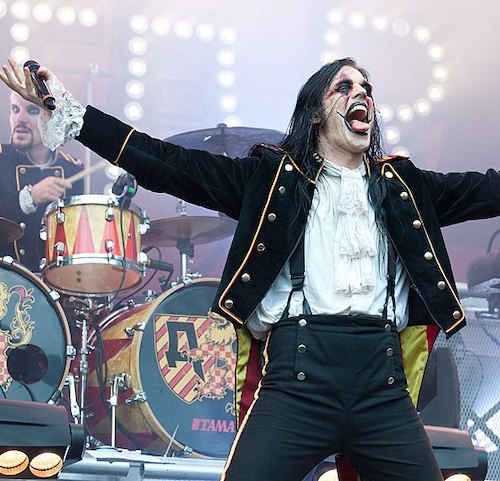 Eckerström and Avatar in concert in 2018.

do what you think is right

At the heart of this rapid acceleration, says Eckerström, is the vegan movement. And for him, it’s not just opting for a Beyond Burger once in a while; it is indeed a change of consciousness insofar as it is a moral imperative. “Veganism transcends conventional politics for me, and I gladly see solutions that conform to all political and economic trends,” says Eckerstrom. “Cows don’t care why fewer of them need to be raped and murdered, whether it’s capitalist or socialized change.”

And if Avatar is ready to do anything with his music in front, he hopes to be true to his namesake as a not-so-subtle teacher, helping fans open up to another way of being possible. It may seem strange and even scary at first, but the group is convinced that this is where the real change happens – that accelerated voluntary evolution is not often easy.

“Heavy metal and all of its subgenres are, of course, first and foremost a style of music with a certain aesthetic, but if you take it a step further, it’s fertile ground for all sorts of difficult thoughts.” says Eckerstrom. “It’s also very divisive. All of this points to a subculture that, despite what outsiders might think, encourages you to think for yourself and not let any current norms keep you from doing what you think is right.

Hunter Gatherer is due out August 7. More info on the Avatar site here.