On Friday, March 24 and Saturday, March 25, 2023, a global contingent of music fans will gather at White Oak Music Hall in Houston as Pegstar Concerts presents the Hell’s Heroes Festival. The two-day music festival will feature a hand-picked selection of international underground metal bands including genre pioneers, much-loved modern bands and more, in one not-to-be-missed concert.

Hell’s Heroes is proud to announce the addition of a very special set to the 2023 festival. Swiss avant-garde extreme metal colossus Triptykon, along with Celtic Frost founder Tom Gabriel Warrior, will join the headliners of the week -end, in an exclusive Celtic Frost tribute set. Triptykon will – for the very first time – rip a set entirely made up of early Celtic Frost songs! This specially selected set will draw inspiration from 1984’s Morbid Tales and 1985’s To Mega Therion LP, two undisputed classics in the canon of heavy metal history. This titanic uproar will prove to be the ultimate example of a celebration of metal, by metal fans, for metal fans.

“We are honored to have Triptykon join the epic lineup of Hell’s Heroes 2023,” said festival organizer Christian Larson. “It’s a really cool and diverse mix of the best metal bands from around the world. Special thanks to all the bands, teams and especially the fans, who make gatherings like this possible. See you at the show !” In addition to booking Hell’s Heroes, Larson also performs as guitarist/vocalist for melodic black metal band Necrofier and is the lead vocalist for Houston heavy metal band Night Cobra. 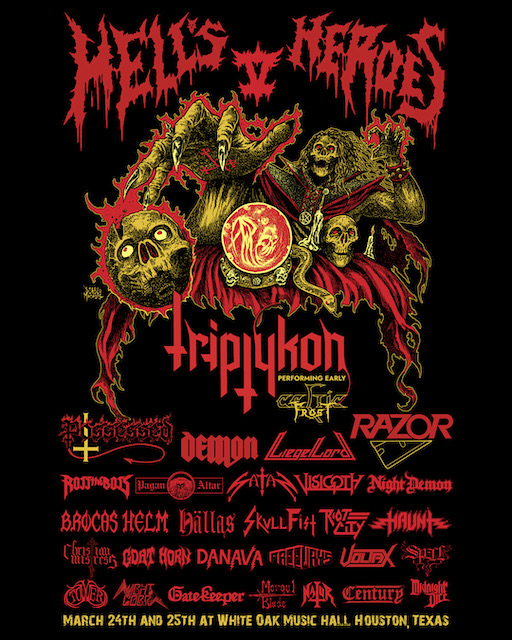